The square of light spilling from my window
casts liquid gold on the rain-drenched streets,
while angry winds, beating harshly sullen
reverberate like an army’s feet
and pound the night with a vicious fury.
An evening fit not for man nor beast,
I think–when, startled, I glimpse the outline
of someone walking the darkened street. 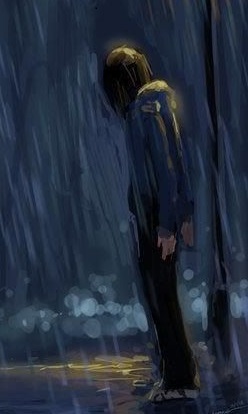 Her silhouette bleared and fogged by raindrops,
small shoulders bowed unmistakeably,
a sodden figure that struggles forward,
the very picture of misery.
I know her!  She is my neighbor’s daughter.
Her father leads her a sorry life.
I wonder at her uncaring parent.
To send her out, and on such a night!

(For what she carries proclaims her mission;
her father’s need, and the cause of strife.)

Her shadow moves from my light.  I hurry
up to the doorstep to call her in.
But I’m too late.  Though I call, no answer.
She cannot hear me above the wind.
And I wonder, closing my door quite slowly,
if any other might have the heart
to spare a thought for that broken figure
struggling home in the windy dark.

…That was last night, and I met my neighbor
on the street corner today.  I asked
if she, his daughter, had journeyed safely,
reaching their home with his liquor pack.
He stared at me from eyes deeply sunken,
his face unshaven, jaw gaping low.
He tried to speak.  Tears grimed down his cheeks,
and then, angered, bitter, confused, he moaned.

“Damn fool!” he cursed me, wiped tears, and whispered,
“my daughter’s dead–died two weeks ago!”

…It’s not rained since for a month.  Such clear nights!
Such nights as I’ve had no cause to think
of storms, or of that streetside encounter
when reason tottered upon the brink.
But clouds roll up, and the storm is threatening,
and I dare not look upon the street
where pall of night is illuminated,
nor lend an ear to the sound of feet.

I dare not open my door, nor listen,
nor gaze at gaps where the curtains part,
nor spare a thought for that broken figure,
struggling home in the windy dark.

This site uses Akismet to reduce spam. Learn how your comment data is processed.